pretties from an autumn walk

went walking today for once. It was nice out, sweatshirt weather but not super cold. Felt good to be out walking. I realized I hadn't even been out in days. Sad sad. 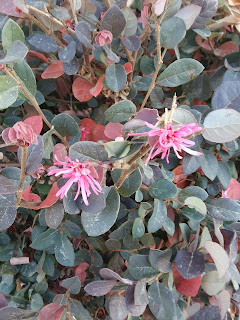 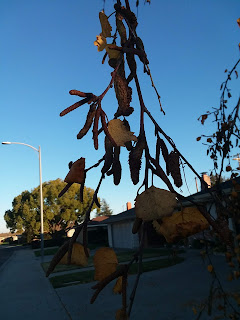 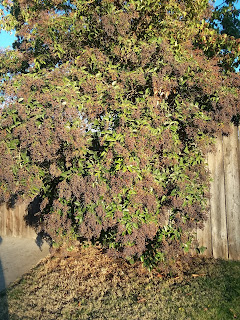 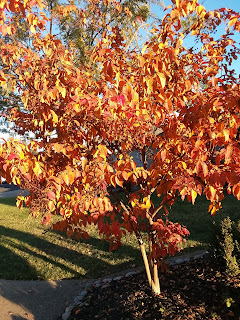 Watching a video today with a woman who is harvesting in her garden, and cooking and cooking. I need some of that energy. I haven't eaten yet today, and know that if I don't eat I won't have energy. So I better get with it.
#2 rolodex that is spattered. I do like the result, but I like things DIFFERENT and not all the same. I'll probably save the last two for another time. 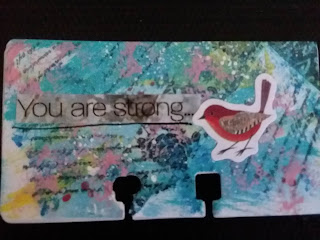 It says "You are strong" if you can't read it. I'm not feeling strong today so thought it was a good time to remind myself that yes, I am strong. I am a survivor. I serve a mighty God. So right now is just a season to get through, one day at a time. One meal at a time.

I have a very vivid imagination. That's a GOOD thing; it's also a bad thing. I'm really enjoying doing rolodex cards. It's fun doing things that get done quickly, and not a lot of money spent. I've watched a few videos, and actually listened to someone talk about how this rolodex/memorydex thing got started.
It seems to me it's genius. However, you wouldn't want ALL your pictures done this way, it's too tiny. Maybe. They could be mounted full size; on some kind of stiffer base that would hold it. Recipes. Address cards instead of my file box. On and on. FUN!! my imagination loves imagining.
Enough of my wandering.
Number one of the spattered/painted cards. This one is in honor of my brand new granddaughter born last Friday. Under the Happy Day is another piece of tape with her name and details. I don't want to display that here. This was fun to be able to just grab a background, and I think I may do more series of four or six basic cards to finish differently. 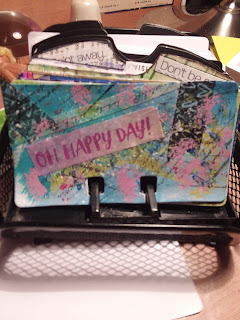 And here's my helper today. She had a piece of onion skin on her nose, which means she has been on the kitchen counter. I never see her there, but I do find footprints there once in awhile, and rarely, she gets into the window. She destroyed one blind already... and she broke one of the pieces on the new one. Silly cat. This morning she's running around insanely. She keeps us entertained anyway. 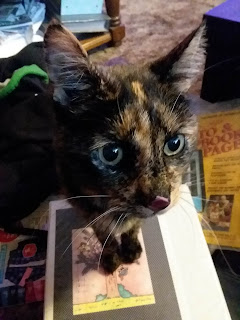 I watched a video today, two actually, who were doing rolodex cards. I suppose I should give credit somehow but I don't think it's a "new" idea.
First they taped together cards. The first one was doing each one the same basically, 16 of them! I didn't want to do that. The next was eight, but I settled on four. I figured no more than four similar cards for my own collection, even though they will have different sayings and embellishments, and I did not do them identically. The first lady did sewing on her cards, I'm not ready for that yet, I don't have enough sewing machine needles to designate one to paper.
The first picture is part way done, I used black and white washi tape to connect them on the front. Then I put blobs of color on, and painted how I felt like it. For some I used sponge (my current favorite way of painting) and other colors I brushed on. I dried each layer so I wouldn't get mud,
The second picture is done and cut apart, but I haven't embellished them yet, maybe tomorrow. I will probably add some more stamping and stenciling as I finish each one. I like the start, though, it's easier than doing one at a time. I usually work on paper and then glue it on, and I still think that is easier with the painting part. I ordered a punch, so I think I will go back to that method. I'll do a whole background page and cut out my favorite parts and use the rest for other projects such as cards, Motivations, Art journal pages, collage... things rarely go to waste. 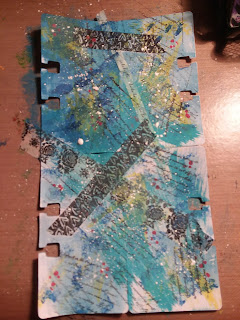 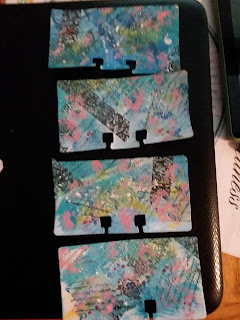 a little different kind of creativity

I've always been a rock hound. My mom always found rocks in my pockets, and the habit didn't really stop. I of course got to know the law about not picking up things in parks... but I have been known to go into the little gift shops and BUY rocks.
I found several containers of little rocks here and there in my cleaning/decluttering, and today decided to find some kind of place to actually display them so I could enjoy them. I also raided my "rock collection" which is one of those plastic containers with dividers. Most stayed there, the geodes and bigger rock specimens. I should say the MEDIUM ones. I also have LARGE rocks. 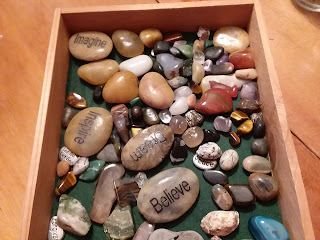 Here's the box. The ones with words on them I got, would you believe, at the DOLLAR TREE.
Some I got in little bags of rocks from here and there. Some I bought at a bead store! There are a few dyed rocks in there, like the one in the bottom right corner. There are a few metal things with words too, you can see "peace" if you look closely. 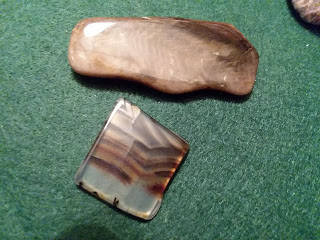 When I was in seventh grade, I participated in a Science Fair, and I decided to show off my rock collection. I was talking to the lady who lived across the street, and she said her father in law was a rock hound too and he invited me to come and visit his rock workshop! He gave me a few things, like the rocks on the left, a petrified fish and a tiny slice of petrified wood. He also gave me some industrial diamonds from Nevada, which of course some wise guy stole from my display!
I'm thankful for that man, who took time out of his busy day to show me so much that made my eyes pop! We talked about the different kinds of rocks, and he showed me so many examples and told me where they came from. 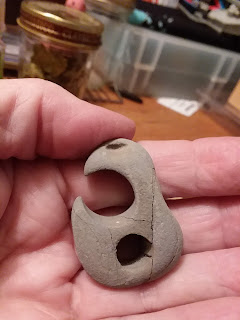 This one I picked up "somewhere" I don't remember but I thought it was one of the coolest river rocks I had ever seen so it went in my pocket.
Most of the rocks I have are small. My collection was smallish rocks and sometimes labeled collections within my collection. But once in awhile I would find a big rock that I just loved. On the land "up the hill" I found a gorgeous pink quartz. It is around three inches across and was just sitting there semi buried in the dirt.
A few were from Oregon, when my brother went there and brought them home and for some reason just dumped them on the hill. When I moved up there, I found them. Finders Keepers I said, but I asked if he wanted them, and he fortunately said no. 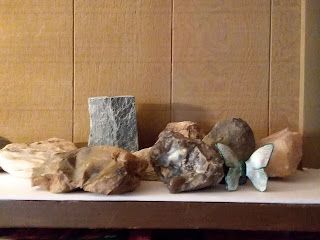 So here are some of the bigger rocks. That quartz is on the right.
I don't remember when I got that pahoehoe. It's lava that hardens slowly into very smooth and ropy formations. That's right in the front. Some of this I have no idea where I got it or what it is. The butterfly is one of my dad's creations.
My dad got a rock polisher once. It took WEEKS to polish in its tumbler. A few of these rocks (the tiny ones) came from there. It is NOT an instant gratification hobby, and you can imagine having that tumbler humming in your shop for weeks? I think he only did it once.
It was good to have parents that let me follow my interests. As crazy as they were. Not the rock collecting, although I did go a bit overboard with that. I haven't collected any lately, except for the little baggie of rocks that JP put in my pocket when he was 2 or so and I got home with them accidentally, but I put them in a little baggie and it makes me smile to look at them.
So there's a tiny bit of creating (cardboard and felt put in the bottom of a little wooden box) and a lot of nostalgia. That box is going to be on the table in my little game corner of the dining room. Just in case someone needs to know.

Motivation#11 it was bound to happen.

Carolyn Dube has taught us that OOPS just means Outstanding Opportunity Presenting Suddenly.
Well, this oops can't be fixed, and that's the way it is.
I put the page UPSIDE DOWN in my little book. So OH WELL. I really like the page, so that's good.
So I don't do upside cards anymore, I check and double check. I didn't, obviously, double check. I just don't see an easy way to turn it around, since it is on the back of another page. So I'll just have to live with it. 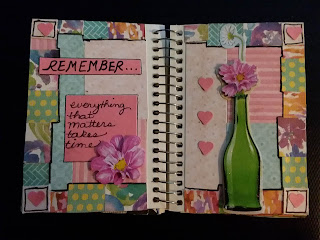 As usual, the sentiment fits the page!
Good advice for next time...
so....... couldn't stand it. HAD TO CHANGE IT to be right side up. So I carefully peeled stuff off and this is what it looks like now, so that I can go to sleep now, knowing that it is fixed. 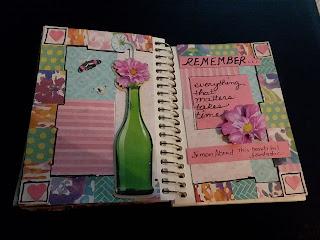 I may have to find a heart to fit in that slightly empty striped spot lower left. I have the perfect punch, and the perfect paper. Then I will be satisfied. And it will not be upside down any more.
I'm a strange mix. On the one hand, my art style tends to the more casual and imperfect, but on the other hand, I am a perfectionist. How does that work? As illustrated by this page where I HAD TO HAVE IT RIGHT SIDE UP. And I could not stop until it was RIGHT.
It's way past my bedtime.

Motivation # 10. One more until I am caught up! 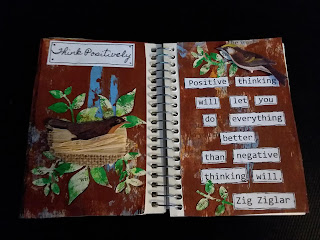 This one made me laugh, because it felt like everything was going wrong and I was getting grumpy about it. I found the birds in the sticker drawer, so that helped. I learned from Cat that you shouldn't try to fasten the delicate leaves with glue stick, so I used Gina K's connect glue, that ought to hold them.
I think however I am more proud of the pizza. Low carb. We've been gaining weight in honor of the pandemic, and hubby's blood sugar has been out of control so we are going back to low carb. Here's the start. LOL... I also have my eye on a low carb Brownie recipe. When hubby finishes cleaning the kitchen I'm going to make another mess. hehe 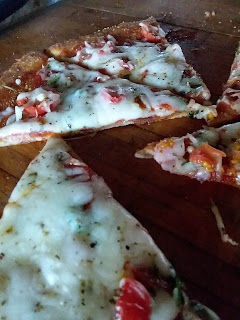